Emerging from the holy flames her face shone like a resplendent moon,

Malayadhwaja Pandya’s prayers to beget a child was answered soon,

Her fish shaped eyes were, oh! So enchanting,

An incarnation of Goddess Parvati, her beauty was mesmerizing.

Unfortunately, with three breasts born was she,

The valiant king was deeply saddened by the queer anomaly,

A voice from the heavens reassured him not to worry,

Dissolving boundaries of gender and sex, he raised her lovingly.

Leading a huge army -a brave princess, she grew up to be,

Even Indra, unable to face her- from the battleground, he did flee,

Holding her head high she marched with elan to battle Lord Shiva,

And as their eyes met, vanished her third breast extra.

Having transformed into a bashful woman brimming with love,

The coy maiden had lost her heart to the Lord above,

The maverick Shiva took the form of handsome Sundareshwarar,

And sought her hand in marriage in complete surrender.

The emerald green deity in Madurai is worshipped by ardent devotees,

A symbol of power- she’s applauded as a warrior queen in hindu mythology. 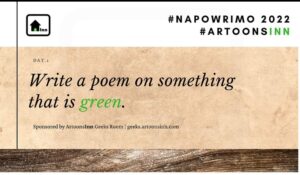 I Kissed a Poet during Fall