New York City has so much to offer to tourists. Being vibrant both during the day and night, it’s a city that never sleeps.

I have visited NYC many times, ticking off the usual places that every traveler would; The Statue of Liberty, the Empire State building, the Hop-on Hop-off tour giving a glimpse of every important landmark in Manhattan, the Times Square and the walking tours along the historic Brooklyn bridge. But the Broadway show was something that I had not witnessed. Though I’ve had people urging me to attend one, for some reason I could never make it.

Last week, after having visited the Empire state building( visiting it has become a ritual every time:)) and walking along the Manhattan and Brooklyn bridge, we had plans of spending the evening at Central Park. However, the weather played a spoilsport. What began as a gentle drizzle gained momentum slowly. So the only option left was to spend time indoors, and we decided to attend a Broadway show.

Why ‘ The Phantom of the Opera?’ While we had a variety of options to choose from, ‘ The Phantom of the Opera ‘ is believed to be the longest-running show in Broadway history. Also, having watched the movie, I was familiar with the story. I wished to know how it felt to watch a live performance versus a movie. I convinced my children to attend this( they probably would have liked to watch Harry Potter or Wicked, but thankfully they didn’t argue).

The tickets were indeed pricey and their value depended on where we chose our seats. We settled for the mezzanine seats on the balcony( Gosh! Now I wish I had paid extra for the front seats. Trust me, it’s worth it!).

Thankfully we bought the tickets at the booth instead of opting for the online ones. That way we saved almost fifty dollars per ticket which we would have incurred towards internet handling/service charges.

After having dinner at an Indian restaurant across the street we were all set for the show to begin at 8 pm. The spectacular auditorium had almost a 90% occupancy. We were asked to mask up and no food or drinks were allowed. We managed to click a selfie just before the show began. Once the show began we were not allowed to click any pictures. 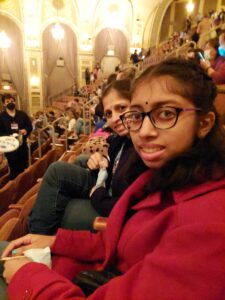 The lights went off and the show began at 8 pm, on dot. The mighty chandelier fell( those of you familiar with the story will understand). The actors entered and exited the stage seamlessly, rendering their dialogues, singing and dancing with finesse. And the orchestra was played with utmost synchronization. I was awestruck by the performance- it was a surreal feeling indeed. Not a word was missed, and not a pitch was offbeat. The settings and backdrops were changed from time to time along with brilliant lighting effects.

And the best part- the actors brought out a myriad of emotions in their rendition that tugged at my heartstrings. The lead actors made the show magical with their scintillating performances. Oh boy! It sure was a whole new experience as opposed to the movie. For the entire two hours, being mesmerized, I was glued to the chair, unable to believe that the actors could perform their roles effortlessly. I could not even imagine the amount of hard work put in and the time that might have been spent rehearsing towards perfecting it.

I enjoyed every minute of the show and did not regret my decision. The musical scores from the show kept strumming in my head for a long time.

So the bottom line is that the Broadway Show was worth every penny. It was a unique experience that I will always cherish.

For “The Phantom of the Opera” story click here;

A Mouthful of Lies