A Mouthful of Lies

“Tring…,” rang the school bell. All the students of class 3 rushed out of the classroom, and so did Sundari. Her round almond eyes were sparkling with delight. As she hopped to the gate to catch the school bus, the ponytails on either side of her head bounced merrily. Her father was waiting outside.

“Appa, why have you come to pick me?” asked Sundari.

“Your teacher had informed me to come and collect your report card,” he said.

“Repo..rt Card!” Sundari’s smile changed from a sliced watermelon to a shriveled wedge of apple.

“Yes! And your math score…”

“Hmm. It’s all because of Gopi,” said Sundari, with a huge sigh.

“Why Gopi?” Sundari’s father was puzzled.

“Actually Appa, Gopi’s mother, had to attend a wedding in Bangalore. Gopi did not accompany her since he had to prepare for the math exam. With his mother away, his father had to cook dinner. But…”

“Hmm… But his father couldn’t cook so he ordered food from a restaurant. And the vegetable rice that he ordered gave Gopi a bad, bad stomach ache that night and so…”

“The next morning he came to school feeling terribly sick. Now, Gopi is my best friend. Wouldn’t he feel bad if I scored better? I knew he wouldn’t fare well in the exam because of his sickness, so I deliberately omitted many problems to score less.”

Though her father was aware of Sundari’s exceptional storytelling skills he decided not to question her any further.

“How nice of you, my darling,” he said, with a wide grin.

“So Appa, will you buy me an ice cream today as promised?”

Just then Gopi walked past to board the bus.

“Gopi, would you like to join us for ice cream today?” asked Sundari’s father.

“Uncle, I’d love to but I have a terrible cold so I can’t,” replied Gopi.

“How sad! In that case, Sundari can’t have it too.”

“Why shouldn’t I?” asked Sundari.

“Because it wouldn’t be fair if you alone enjoy it without your best friend, remember?”

Sundari felt trapped. She didn’t know what to reply.

“By the way, what was your score in Math, Gopi?” asked Sundari’s father casually.

“Despite being terribly sick on the day of the exam?!”

Sundari realized that there was no room for escape now.

“Sundari, you spun a great story, haha! But remember, you don’t have to feel ashamed and lie just because you score less. Your parents and teachers can help you score better. Promise me you will never lie in future.”

“Good! I promise to buy you an ice cream…in future,” said her father.

Sundari nodded her head in dismay. She realized lying had consequences.

This story was first published in Penmancy.  Here’s the link; 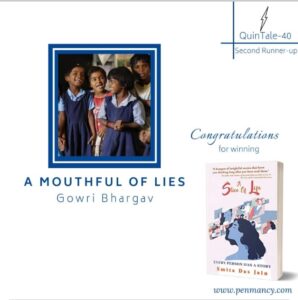 Questions of the Heart

Simmering Embers Amidst the Sands of Time

Thou Art My Love

Hehe… what a cute story. Had me chuckling at papa’s turning the table.